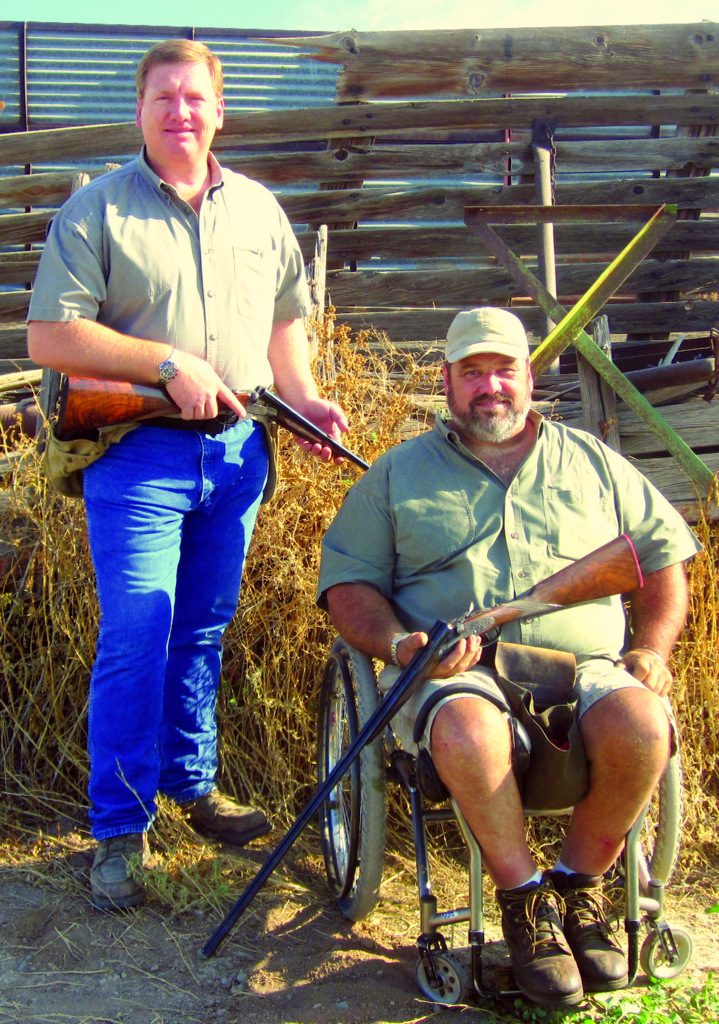 We made our first efforts to import shotguns from Europe in 1968. We wanted to satisfy our own desires to find a few nice English-style doubles which were less costly than a London gun. After seeing the guns in use, several of our friends and hunting companions asked us to order guns for them. As more of these guns were distributed, greater interest was generated and it became obvious that there was a substantial market for this type of gun.

In 1973, we began importing shotguns for resale on a regular basis. We opened our Westlake Village showroom in 1978 and moved to Arizona in 1994, where we opened the Scottsdale showroom. Our current showroom is located in North Scottsdale in the same area famous for the Barrett -Jackson Auto Auction and the TPC golf course that is the site of the Phoenix open golf tournament.

We are constantly striving to find the best guns and gun values available and over the years, we have imported some very fine guns from many of the world’s best makers. Currently, we import shotguns and rifles from F.lli Piotti, Armas Garbi, Pedro Arrizabalaga, Arrieta, Rizzini B., and Chapuis. We have long-term relationships with each of these companies with good communications to assure proper completion of your custom order.

In addition to handling custom orders from these fine makers, we try to maintain a substantial inventory of new and used guns from them, as well as a selection of fine pre-owned doubles and other guns of all makes.

To place an order for a new bespoke gun, or for more information, please call or stop by our showroom.

William Larkin Moore & Co. has been one of the country’s largest importer, dealer, and wholesaler of fine firearms since 1973. Founded on Bill Moore’s vision of selling quality products at honest, direct low prices; our showroom in Scottsdale is home to over 400 handmade sporting firearms, and accessories, one-of-a-kind collectibles. 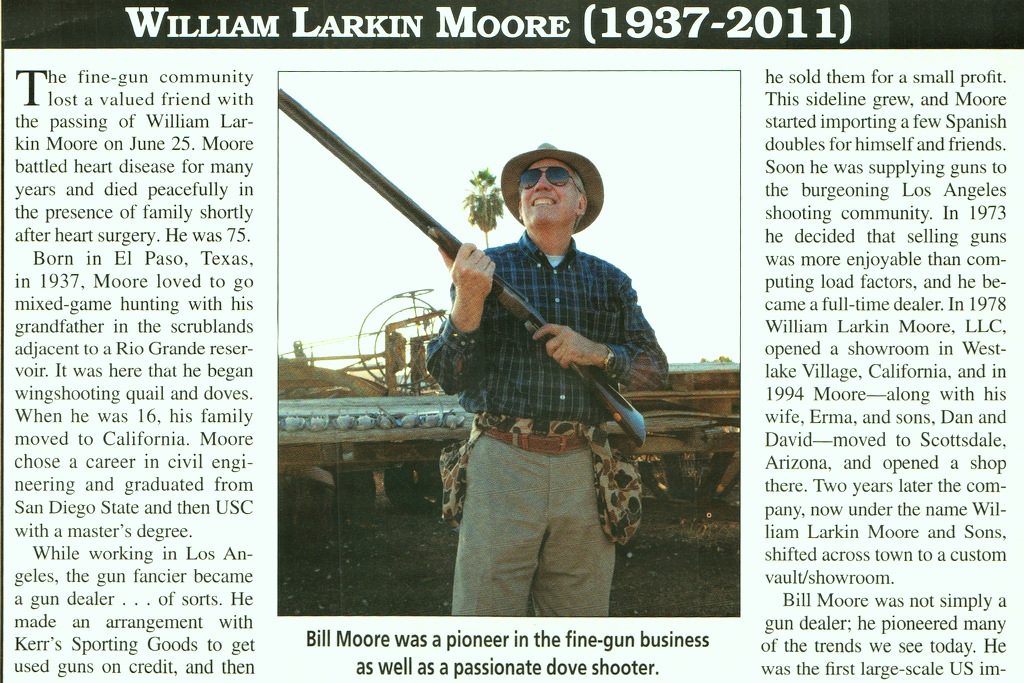 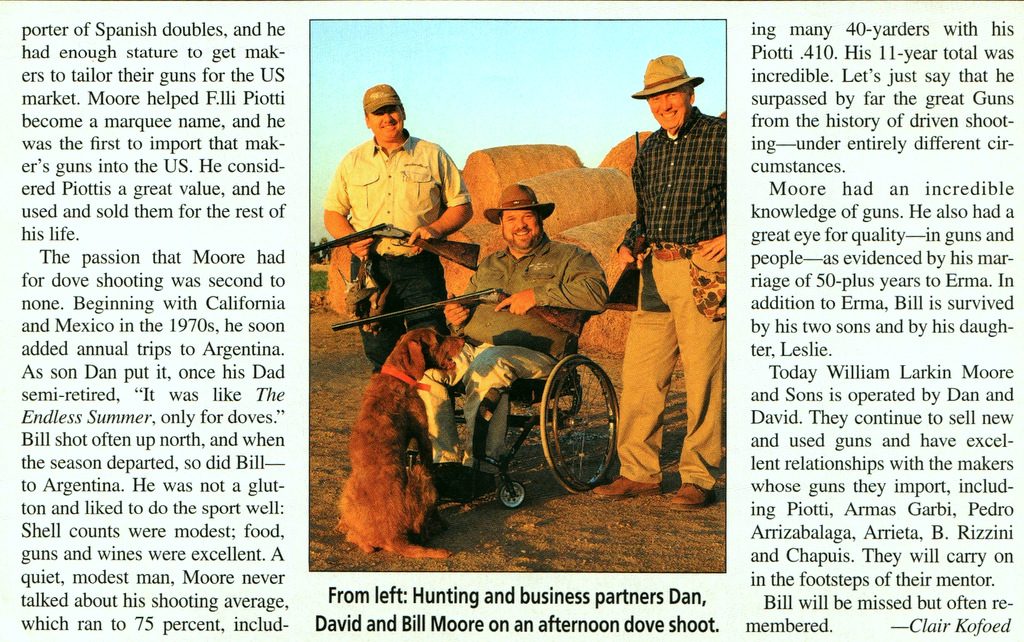 William Larkin Moore was a gentleman, a gentleman with a passion for fine guns. His passion drove him into the importation and sale of fine guns, and many American gun lovers benefitted from both is good taste and his wise business practices

Bill was an engineer. After graduating from the University of Southern California, he went to work for the Army Corps of Engineers.  Later jobs with private firms brought him to the central coast of California where he fell in with a bunch of gun nuts and joined the Porter Ranch Hunting Club. The dove and quail shooting there inevitably led to discussions of what constituted a fine shotgun.

In 1974, Bill started importing Spanish shotguns from Armas Garbi, and company that William Larkin Moore & Sons still represents. This is surely a record in the firearms importation business.

Bill added the wonderful Italian manufacturer Fratelli Piotti in 1976. This was long before American gun lovers knew what wonders the Italians could produce. The firm still represents Piotti to this day, more proof of their integrity and reliability.

Bill opened his first showroom in Westlake Village in 1978. After twenty years there, he moved to Scottsdale and his most recent showroom there is a walk-in vault. The firm can display up to 500 fine firearms and simply close the vault door when they close for the night – no more having to put all of the guns into sleeves and then put them into safes. Their showroom is a combination of a fine gun store and a museum.

As I knew Bill for many years and did a lot of business with him, I was frequently asked why I rated him at the very top of gun dealers. My response was simple. You may not be entirely pleased with what Bill tells you, but he is telling you the truth, and years down the road, he will still be telling you the truth.

William Larkin Moore only had one face.

Bill’s wife Erma played a key role in his success. She attended many gun shows and would look after the guns and answer questions when Bill was visiting his pals in the trade.

Bill and Erma’s two sons, Dave and Dan were truly raised in the gun business. Dave started helping his father in the late 1980’s and was the first of the family to move to Arizona. Dan went into the business right out of college. They are, as one would expect, extremely knowledgeable. They are carrying on the family tradition of straightforward talking and trading. They currently have guns on order with Arrieta, Rizzini B, Chapuis and Hartmann & Weiss as well as their long-time suppliers Armas Garbi and Fratelli Piotti. In addition to their wide selection of fine new and used guns, they sell shooting accessories and desirable items for any gunroom.

William Larkin Moore & Sons is a tribute the long life and high ethics of Bill Moore. A visit to their fine showroom at 16622 N 91st, Suite 102-103; Scottsdale, AZ 85260, is an opportunity for any gun lover to connect with Bill’s heritage. It would be best to call for an appointment (480/951-8913). An easy way to visit the company and to see their inventory is to visit their website: info@wlmsons.com 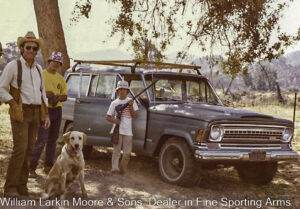 William Larkin Moore was first and foremost a wingshooting and fine-gun enthusiast, and those entwined passions led him into the gun business in 1973. He went on to become one of the country’s foremost importers of fine shotguns — primarily from Italy and Spain — first with a showroom in Westlake Village, California, and then moving with his wife, Erma, and sons, Dan and David, in 1994 to Scottsdale, Arizona, where William Larkin Moore & Sons continues to thrive.

Bill Moore passed away in 2011 at the age of 75. In addition to his family and the business that bears his name, he left behind a large private collection of exceptional firearms. Numbering in the many dozens, the collection includes Purdeys, F.lli Rizzinis, Fabbris, Piottis, Diamond Grade Dalys, near-mint Parkers, extraordinary double rifles and more. Many feature stunning examples of the engraver’s art.

“I Have One of your guns”  In Name Sake Only

As Michael S. Franck tells Moore’s story in The Double Gun Journal in Winter, 1999, “William Moore was the son of Charles Moore, one of the foremost gunmakers in his day who ran a shop from 1780-1835 at 77 St. James Street. This was in the heart of the London gun quarter that produced the finest gunmakers in the world during the eighteenth, nineteenth, and early part of the twentieth Century…

“Moore was apprenticed in the shop of the famous Joseph Manton, who ran and leased a shop at 315 Oxford Street. First as a stocker [who made and fitted stocks], Moore worked with other craftsmen who later became the first generation of modern gunmakers – James Purdey, Joseph Lang, William Greener, Charles Lancaster, and others… A contemporary once described Moore as a ‘very ingenious workman and an excellent shot…”‘ 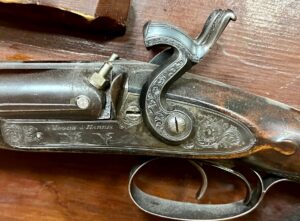 Legendary sportsman Colonel Peter Hawker, despite the fact he was wed to Lancaster’s guns, regularly praised Moore. In his famous “Instructions to Young Sportsman” he wrote, “Also Mr. Charles Moore, who was an old hand at Joe’s [Joseph Manton’s], and knew, to a hair, how to fit a man’s shoulder to a gun. I have often stood over him when he was a journeyman, and no man better pleased me with a job. Depend on it he will do well [as a gunmaker] and get to the top of the tree… ‘Billy Moore’ is a right-hand man with the ‘knobs,” or crack pigeon shooters, and their patronage is a host in itself toward a good lift in business.” (pg. in the 1830 edition.) Hawker was on good terms with both the Duke of Clarence, who became King William IV, and also Victoria’s husband Prince Albert. It is possible that Hawker’s opinion contributed to the fact that Moore later became both “gunmaker to William IV” and “gunmaker to Prince Albert.”

Before 1833 Moore did strike out on his own, selling guns under William Moore and Company at 78 Edgware Road in London. Between 1847 and 1853, he partnered with William Gray at the Edgware Road shop, and the firm was rechristened William Moore and William Grey Gunmakers. Albert again awarded the credit “gunmaker to Prince Albert” to the Moore and Gray partnership. The partners and their employees then moved to Bond Street, Mayfair, the center of the best gunmakers in England at the time. (Old Bond Street and New Bond Street are one, by the way, the old distinction kept only in the postal addresses.) There the business was again titled “William Moore & Company,” although the partnership with Gray persisted. 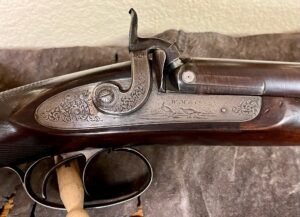 There is speculation but no certainty on the death of William Moore, but most consider it likely soon before 1870, although it also may be signaled by the 1873 renaming of the company to William Moore, Gray & Co. in 1873. In any case, it is certain that Gray survived Moore, and continued to produce fine shotguns at the Bond Street address, with their crew of internal craftsmen, outworkers, and apprentices. Among the those who worked for Moore and Gray of 43 Old Bond Street were Henry Atkin jr., son of Henry Atkin, the first craftsman Purdey had hired when he set up shop. The younger Atkin was first apprenticed to his father, at Purdey, and then worked for Moore and Gray from 1862 to approximately 1874. (See G.T. Teasdale-Buckall in his Experts on Guns and Shooting, who actually interviewed the younger Atkin.) When Atkin set up his own shop, the firm he founded eventually became Atkin, Grant & Lang Ltd.

A Moore and Gray apprentice who became particularly important in the trade was Frederick Beesley, whose company also survives today. Among several important innovations, he invented the so-called “self-opening action” that was purchased by Purdey. As the Beesley company tells his story:

“In 1861, upon reaching his 15th birthday, Frederick secured an [10 year] apprenticeship with the London gunmaking firm of William Moore & Grey, indentured to William Grey, at 43 Old Bond Street. It is probable that Moore died during Frederick’s apprenticeship. Grey however was a canny businessman who had helped Joseph Manton run his firm. He passed on to Frederick some of those skills that would prove so useful t him when he came to run his own business.

Meanwhile, Frederick was also learning to build best quality sporting guns and rifles and developing his own mechanical and engineering prowess.” 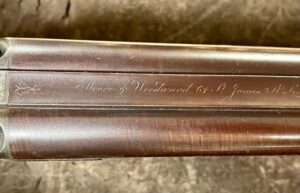 In summary, as Teasdale-Buckall put it, “Thus the various workmen of old Joe Manton were in the next generation the most consummate judges, as well as the greatest salesmen, of London guns. Charles Lancaster, Thomas Boss, James Purdey, and William Moore between them created an epoch in gunmaking.” 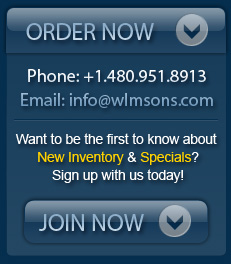